In honor of Valentine’s Day, we’ve been collecting stories of couples who met at DePaul to share with our Blue Demon community! Thank you to everyone who submitted. If you want to have your Demon Darlings photo and story added to this album, please email alumnisocialmedia@depaul.edu!

We met the summer after freshman year at North Avenue Beach and were introduced by a mutual friend, who turned out to be one of the best men at our wedding! We became

fast friends, going out together on the weekends and sharing our love of music at concerts throughout the year.

We began dating during our junior year of college, and two years after graduation we got engaged in front of family and friends on Christmas Day. Since DePaul is what brought us (and most of our bridal party) together, we immediately called DePaul after our engagement to secure a date. We exchanged vows at the beautiful St. Vincent de Paul Parish on June 23, 2018. We love to revisit the campus where we fell in love and we will always look back at our DePaul days fondly.

Both in the College of Liberal Arts and Social Sciences, Frank (’17) and I (’18) first met during my junior year and his senior year at DePaul. The first time we met was on the

I was tabling two spots away from his group, and I remember wearing a summery, yellow dress that day. I had walked over to his table and talked to a mutual friend near him, and he noticed me but never said anything! A couple weeks later, he’s showing up at my club meetings. The rest is history!

I’m working full time and he’s finishing his masters at the University of Chicago, and we couldn’t be happier. We’ve been going strong for two years and counting. Thank you DePaul, and thanks to the involvement fair for letting us meet that day! 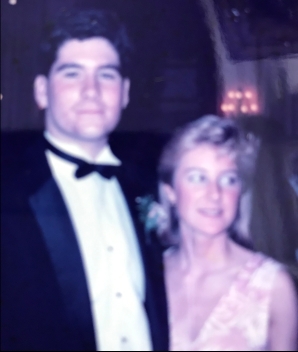 In February 1986, the DePaul Blue Demons were scheduled to play the Notre Dame Fighting Irish in basketball. A coworker of mine was a Notre Dame grad. After a little jabbing and maybe a small wager on the outcome, we decided to road trip to see the Blue Demons take on the Irish on their home court in South Bend. This was during winter quarter of my junior year.

Sadly, the men’s basketball team lost by a few points to Notre Dame that night. I did, however, come out a winner nonetheless. Bored with the gloating of my Notre Dame friends at a post-game event, I decided to seek out someone else to talk to. That night I met Colleen Dolan, a Saint Mary’s College senior. To this day I still have DePaul season basketball tickets and am still married to Colleen. Go Demons!

Cory and I met our sophomore year of college while working together in the Office of Health Promotion and Wellness (HPW, #TakeCareDePaul). We spent two years as coworkers and close friends. During that time, he was seeing someone else, which was unfortunate

for me considering I had a huge crush on him. However, my luck turned around the summer of 2017 when he found himself single. We started dating the day before fall classes started our senior year. Before this happened, I had made up my mind on moving back home to Texas after graduation. No surprise—that quickly changed as we fell absolutely head over heels in love with each other.

We’ve been together for about a year and a half now—both of us living in Chicago and working downtown. Without DePaul and without HPW, our relationship would never have existed. The transition to post-grad life is challenging, and I could not do it without his support. We are beyond excited to continue learning and growing together as individuals and as a couple.

Victor and I first met through mutual friends at a DePaul Alliance for Latinx Empowerment (DALE) event during my freshman/his sophmore year. We didn’t interact much during that first meeting, but he remembers rolling his eyes at me for laughing at all of his fraternity brother’s jokes that night. We 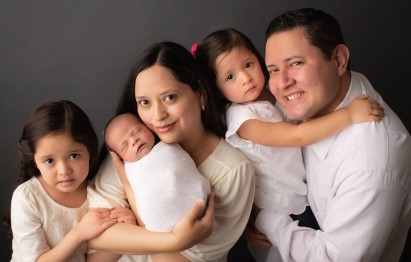 would often run into each other after that through other DALE, Gamma Phi Omega and Tau Phi Sigma events. Our mutual circle of friends continually brought us together and so, in time, we struck up a friendship. It wasn’t until 1999 that our friendship started to grow more and by the end of that year, we decided to move our friendship to the next level. After 10 years of dating, we finally got married in 2010 and started our family in 2014. We have two beautiful daughters, Olivia (4) and Ava (2), and just welcomed our son, Evan, in January of this year.

In honor of Valentine’s Day, we would like to share the story of #DemonDarlings, a couple who met at the Driehaus College of Business!Crystal Hernandez (BUS ’18) and Freddy Thomas (BUS ’18) met during freshman orientation in 2014. They took several 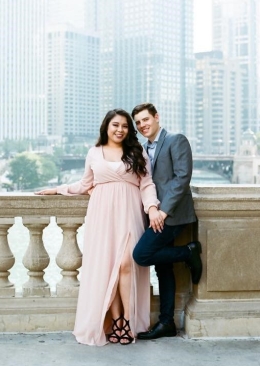 classes together—it was never planned and was just by happenstance. They also were on the same study abroad trip to India together in December 2017. Crystal and Freddy said they were best friends first and a couple second. They’ve made it through ups and downs because they were able to remove this lens of being a couple and talk about things as two best friends would. Crystal earned her bachelor’s degree in marketing in 2018 and is currently an eCommerce marketing associate at Pepsi. Freddy also graduated in 2018 with a degree in accounting and is a tax staff member at Plante Moran. Crystal and Freddy are getting married Sept. 1, 2019, and we wish them all the best!

This site uses Akismet to reduce spam. Learn how your comment data is processed.